It often makes sense to have your bot delay its responses, rather than dump a lot of content into the conversation all at once. Also, it can be more attractive to break up a large section of text into smaller parts or 'bubbles'. It is easy to do this and to indicate to the user that the bot is preparing a new response, a talk bubble icon will move along during the delay.

On the build screen, click on an interaction to edit it. Click on the Chat Bubbles icon towards the top and select an Instant Response or a Delayed Response:

If you choose an Instant Response, you may split your bot responses into different bubbles by writing ::next:: within the response text.

See the examples below:

The response formatting above would result in these chat bubbles being displayed to the end-user: 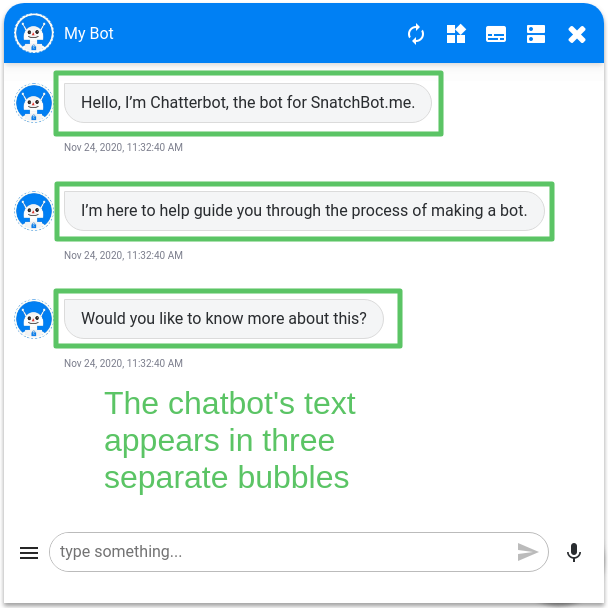 What Is a Delayed response And How Do I Set It Up?

The Delayed response allows your users to see when the chatbot is preparing to write a message. It allows you to offer a more natural chat experience than instant responses from the chatbot. They serve to indicate to the user that a message will be coming shortly.

If you choose Delayed Response, you will incorporate a line like this: ::next-XXXX:: into your chat text. Replace the Xs with a figure for the number of seconds you want the bot to delay. So, for example, ::next-2::. During those two seconds, the user will know that the bot is thinking by the appearance of the bubble icon. Maximum delay is 60 seconds.

Set a Delayed response in Cards

Delayed responses are also available for Cards. Whether your card is text, image, or gallery, find the Delay option and change it from 0 to – for example – 1:

This feature is not supported on Viber (Desktop and Mobile) and Line (Mobile).

If you use the TTS feature and Chat Bubbles at the same time, then an end-user will get several audio tracks according to the number of bubbles.

Addition, subtraction, multiplication, and division are four arithmetical functions that the bot can perform.