Automations are available only for PRO-Bots. Click the 'Upgrade to PRO' link to open PRO-Plan settings. Learn more about PRO-Plan.

To set up a new automation go to the Automations tab on the Build page. Click the 'Create automation' button to add an automation:

Next, you need to select a type of automation: 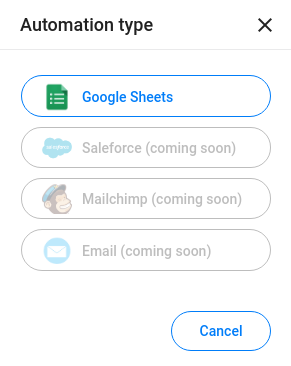 The Automations tab is not available in the Plugins section when you create a plugin, however, you can add automations to the plugins that are added to the bot.

Google Sheets automation allows users to export bot attributes to Google spreadsheets and vice versa. A user has to select the type of export (from/to spreadsheet), authorize a Google account and choose a spreadsheet and attributes.
When end-users engage with these interactions, all the data will be exported/imported to/from Google Sheets, according to the settings.

To continue, select sub-type of the automation in this window: 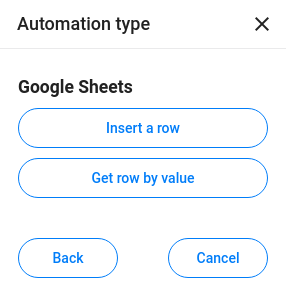 The standard Google authorization window will pop up:

It is also possible to get authorized on the Automation tab in the Profile section.

Once you are authorized, your authorization will be saved. You can use it later when you create new Google Sheet Automation in any of your bots.

Step 2.
Select whether you want to create a new spreadsheet that data will be saved to, or have the data uploaded to an “Existing spreadsheet”:

This file will be automatically populated to the 'Spreadsheet' and 'Worksheet' fields on Step 3: 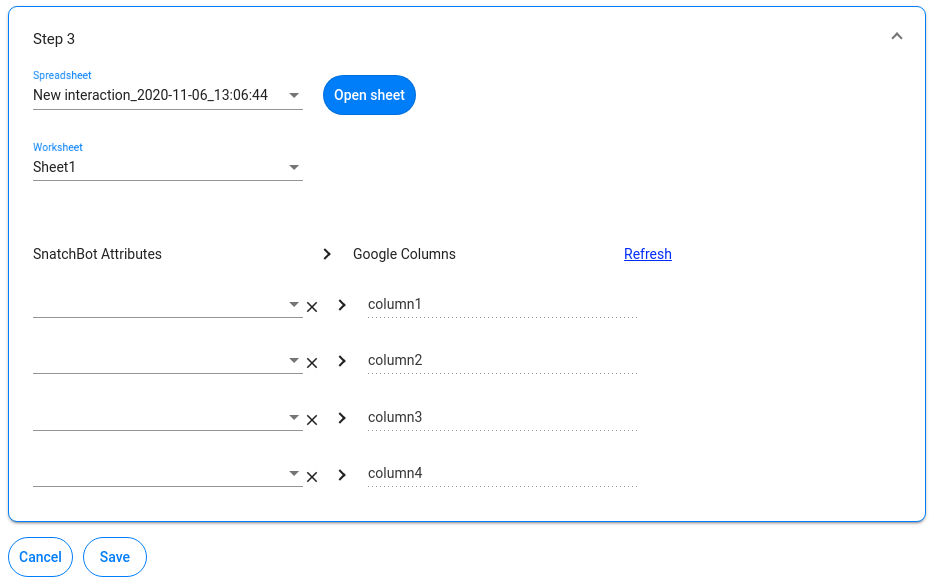 SnatchBot Attributes
Here you need to select and associate attributes you want to export to the Google sheet.

The SnatchBot Attributes column values can be set to:

You don’t have to select attributes for all columns. You’re allowed to associate only the desired attributes. 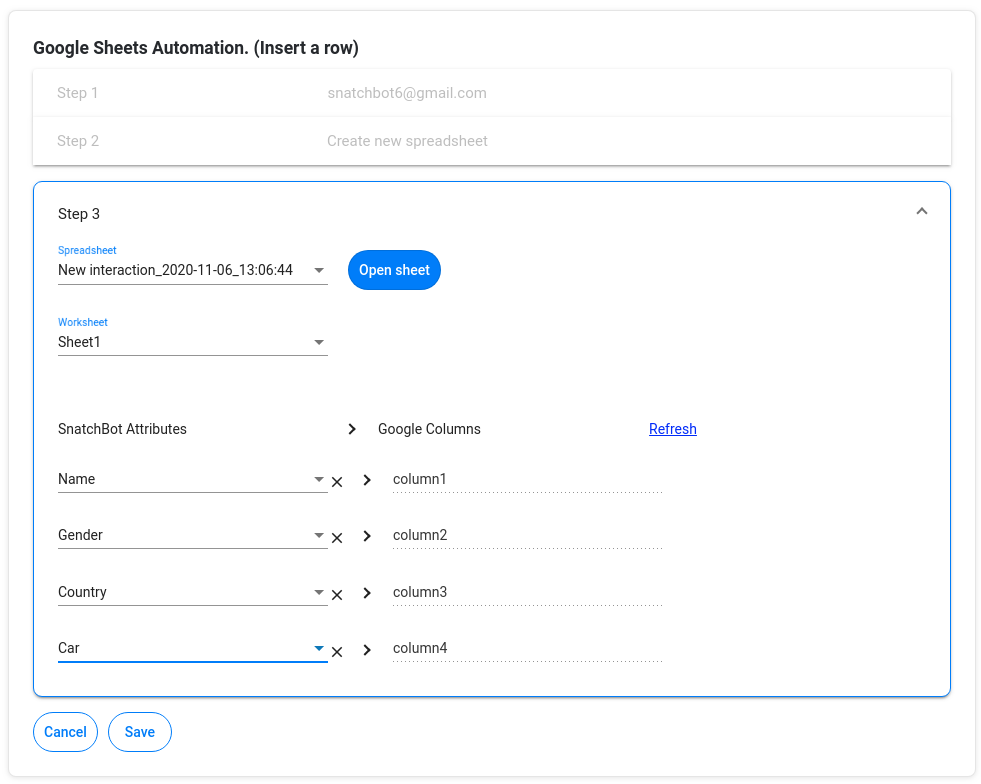 After the Automation is set up, you have to configure the bot in such a way that the associated attributes are populated by values before the interaction with the automation is reached.

The automation is saved after you click the Save button.

Once a user has gone through these interactions and reached the interaction with Automation the attributes will be sent to the Google sheet:

Use an existing spreadsheet

If you select this option you will be redirected to the step 3. Here you need to select one of your spreadsheets and pick a worksheet. As if you create a new spreadsheet, you need to select and associate attributes you want to export to the Google sheet and press Save.
Make sure the chosen spreadsheet has the required values in the first row.

Get row by value

Do not use the received attributes within the same interaction.
You can use them only in the subsequent interactions.

On step 2 you have to select a Spreadsheet, Worksheet, Lookup Column and Lookup Value. 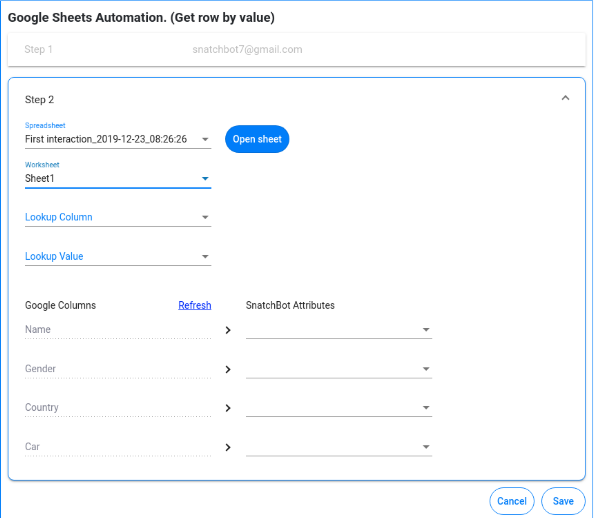 If there are two or more same values in a Lookup Column, then the system parses the first (upper) value in the column and takes the related data.

Attributes that the user creates dynamically in Bot Message using the “Set Attribute” command won’t show up in the dropdown fields of the SnatchBot Attributes column.

The automation is saved after you click the Save button.

Every bot admin can see all the automations created by other users. But editing/deleting is available only for the person who created the automation.

It is also possible to turn on/off any automation, regardless of your role:

When you export a bot, then all Automations will be exported, as well. To use these after export, you have to be authorized on the same Google account.

In this video we are going to take a quick look at a problem that you might encounter with the Google Sheets Automation and how you can quickly and easily solve it.

In this video we'll be covering a simple way to specify and draw down a custom message in the interaction where you want to show the results from Google Sheets in order to notify the end-users that the relevant information was not found.

This video will be very useful If you want to look up something random in a Google Sheets Automation. Let's have a look at how it is possible and super easy