It is very straightforward to backup your bot; you export it as an encoded and unreadable txt file, which you can share or use to restore your bot at a later date. Simply go to the Configure page. 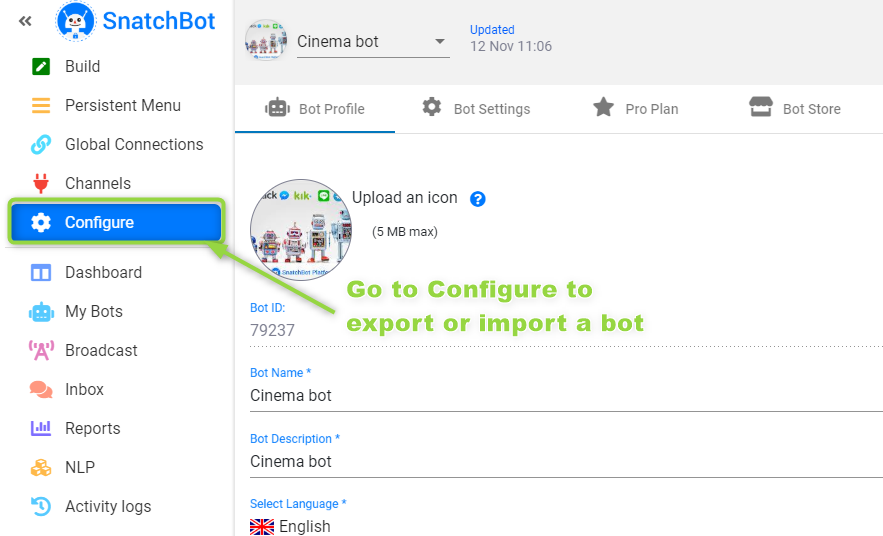 Then click on Export, the default name for saving the file is your unique bot number. But you can save it under any name.

Export - download a bot as a txt file (make a backup)

If there are such connections, you will see the next message:

All attributes will be exported too.

Ok - import a bot, all broken connections will be removed.

The system also checks the bot when you copy it on the My Bots page.

NLP and Import/Export
If a bot has NLP connections, NLP models must be trained before export. All NLP models will be exported too.

Collaboration feature and Import/Export
Export and import of the shared bot is available for the bot owner only.

Automations and Import/Export
When you export a bot, then all Automations will be exported, as well. To use them after export, you have to be authorised on the same Google account.
If you attempt to import the bot into another SnatchBot account, you will get a notification:

If you have a Pro bot, which contains Pro automations, such as Google Sheet automation, and if you try to import this bot to the free bot, then you will get the following message: “You have one or more Pro Automations that cannot be imported to the Free bot. These automations will be ignored. Proceed?”

To get to the Configure page you first need to create a bot or have opened one. Also, note that importing a bot will overwrite the one you have opened.

Check the Configure section to see and manage the settings of your bot.