All the data in Advanced Analytics is stored for two years.

The system continuously collects data from all bots, but the data is available only for those users who have bots with PRO-Plans

Advanced Analytics is available if you have at least one PRO-bot in your account.

Advanced Analytics are unavailable in the following cases:

On this page you will find different charts and tables, which contain various data about your and shared bots, such as the average user's lifetime or the total amount of messages sent and received from a bot.
All the data are displayed for the last 7 days. To update the data, refresh the page. 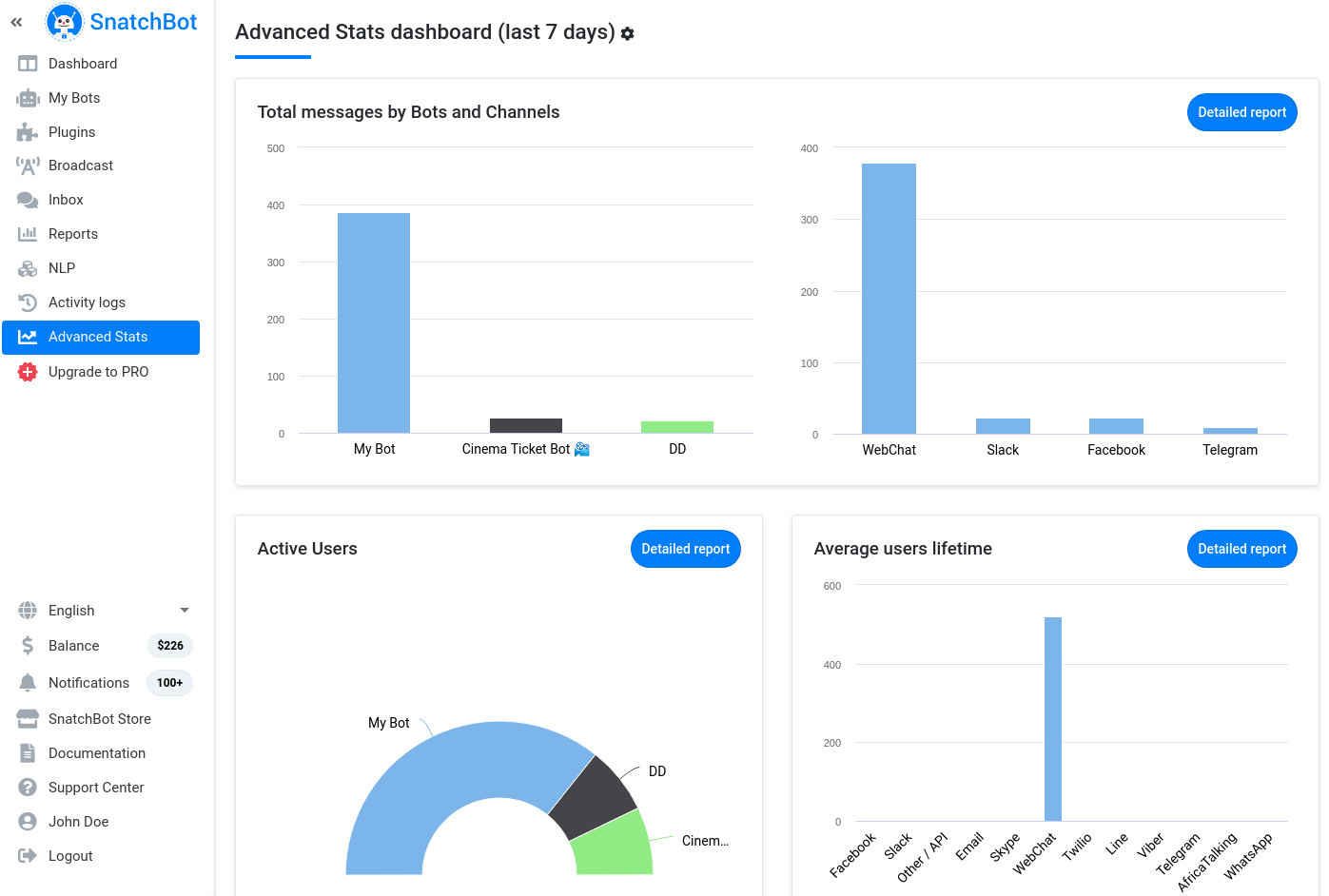 You can save reports from each section as an XLSX file. There is a ‘Download XLSX’ button at the bottom of each section. Press the button and the system will send you an email message that contains a link to the XLSX file. The message is sent to the address specified in the Profile section.

Filters
Each section has a filter panel at the top of the page. You can filter statistics by Bot and by Period:

There are only PRO-bots in the ‘PRO-bot’ filter. Once a bot loses PRO-status, the bot will be removed from the filter.

Here you can see the geolocation data about those users who have had conversations with your bots in the Webchat channel. Two chart types are available: Pie chart and Bar chart: 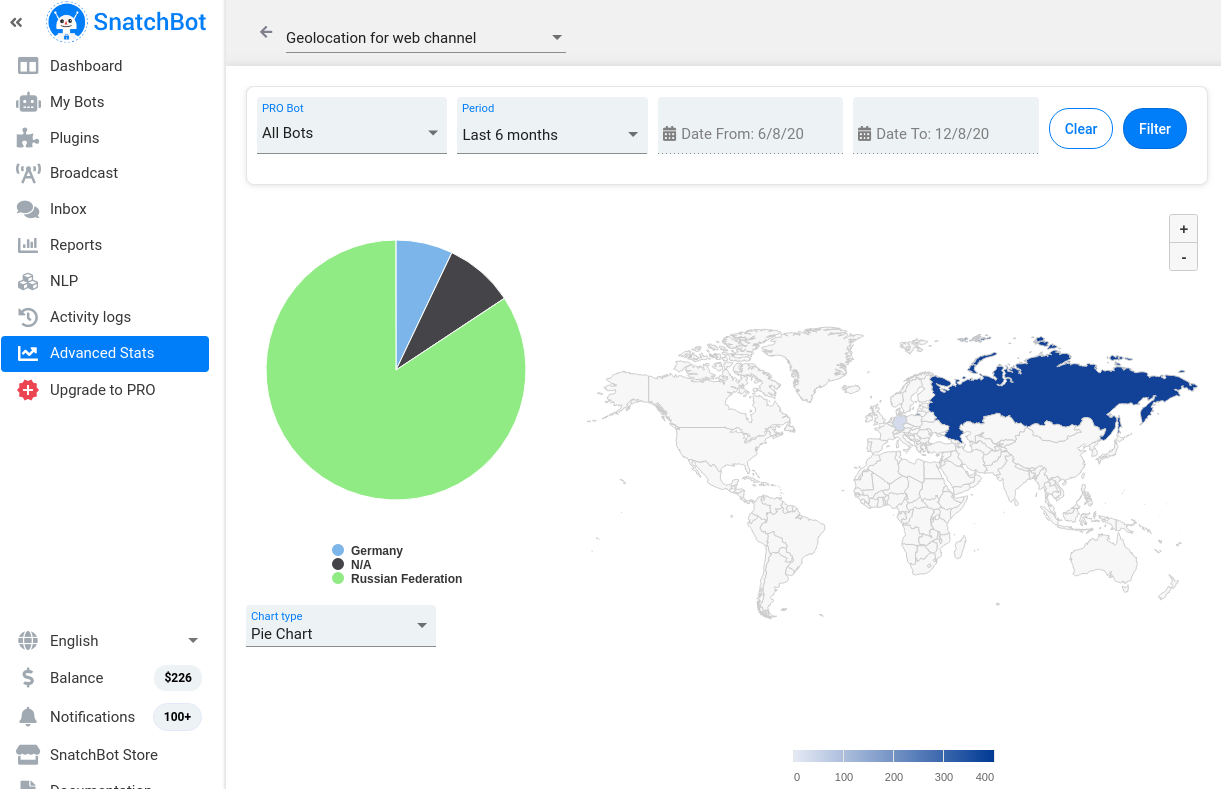 Here you can see which interactions are most often the last in conversations with your bots. The chart displays the number of users who finished a chat on one particular interaction for the selected period of time.

If the conversation has ended on the Bot message 2, then the Exit interaction will be the interaction 1, because a user has replied to that interaction.

The chart is updated after one hour since the end of the session. 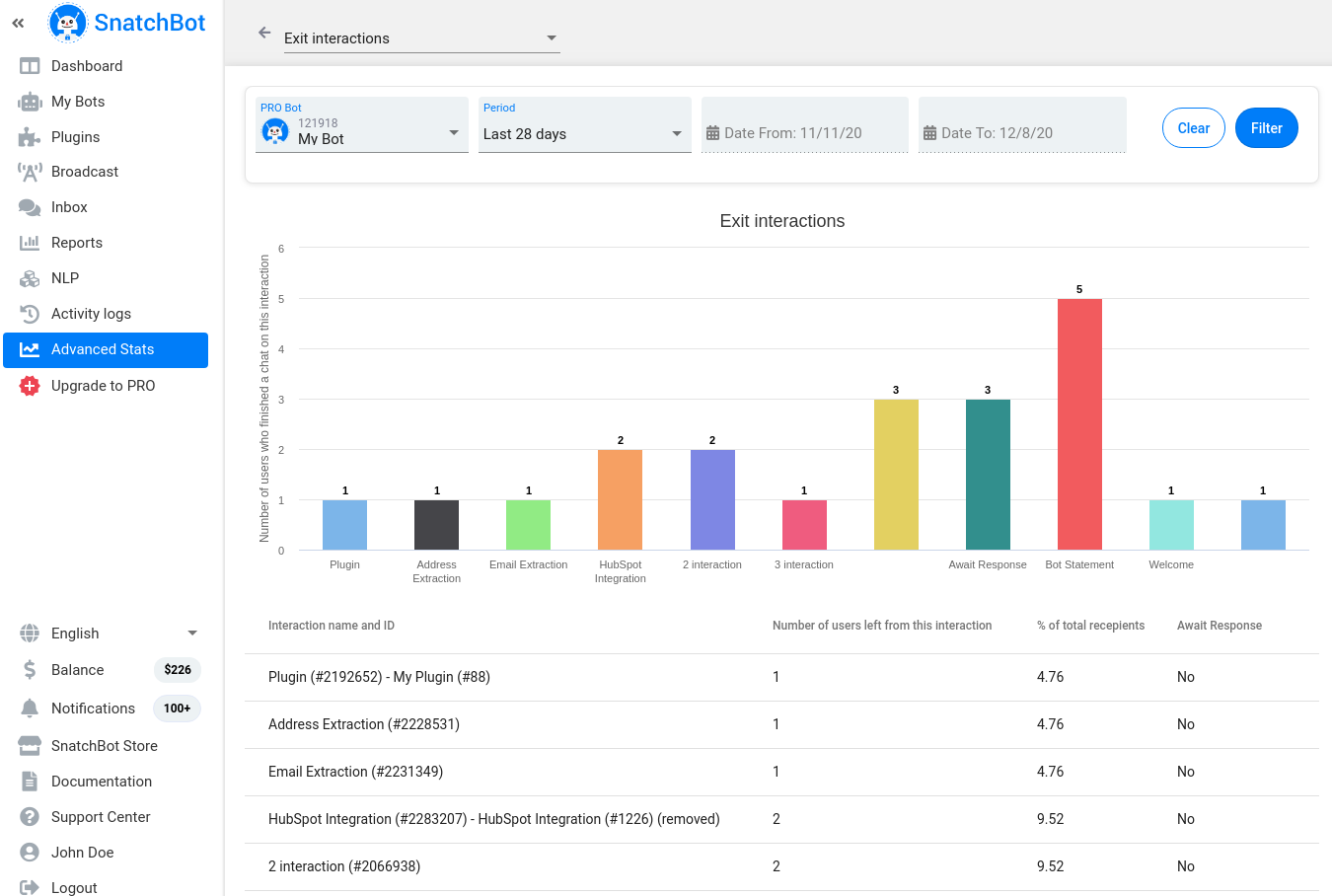 Each record contains the following:

All the deleted interactions are marked as ‘Removed’, but included in the statistics.

The diagram is based on the sessions that started and ended within the selected period. There is the average amount of time spent by users, per each channel.

If you select All Bots in the PRO-Bot dropdown, then you will see a chart which displays the average session duration of your PRO-bots for each channel: 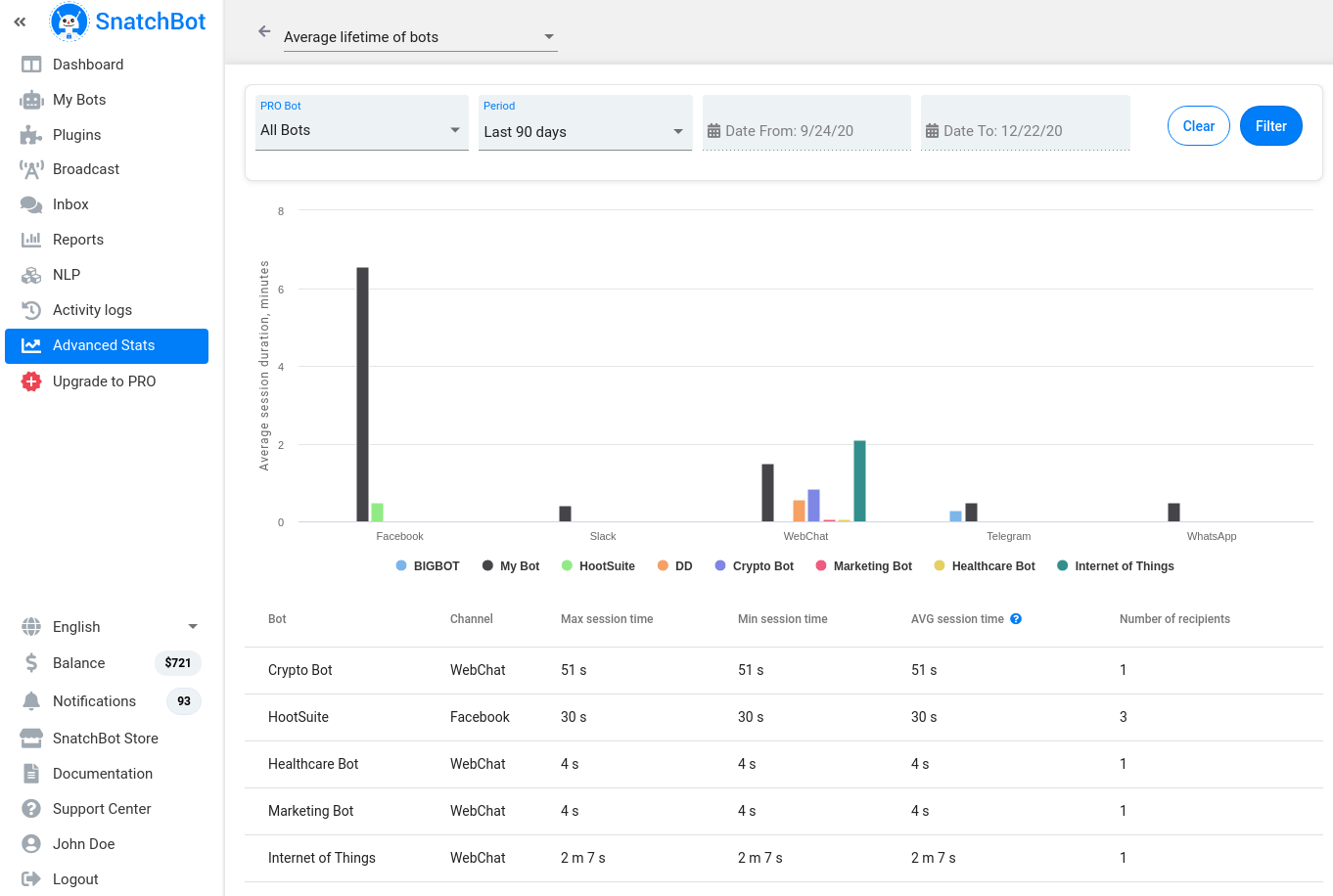 If you select a bot in the PRO Bot drop-down, then you will see the chart for the selected bot: 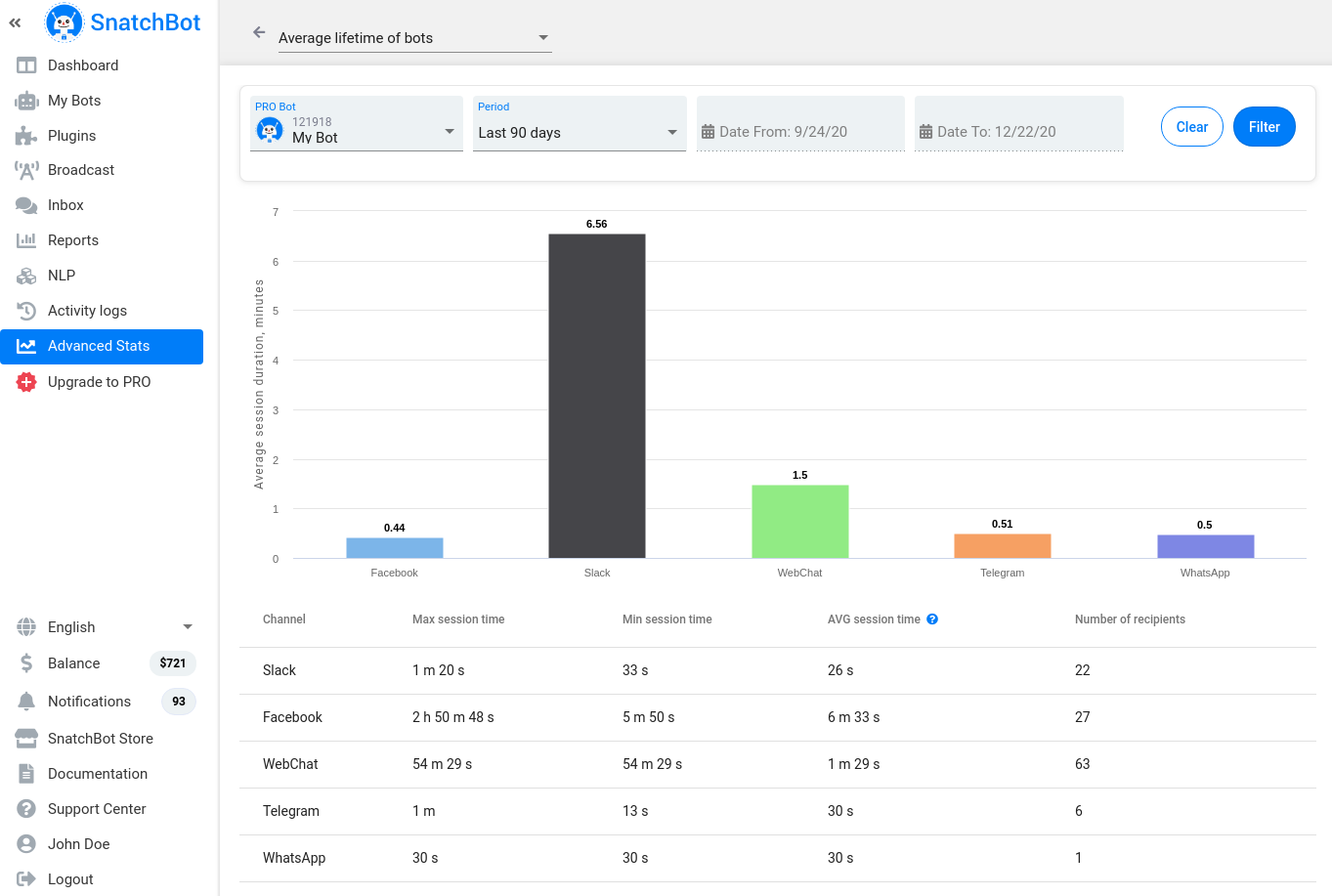 Table with activity data.
Below is enhanced data about user activity for each bot:

The session expire time does not affect any data in Advanced Analytics.

In this chart, you can see the number of samples extracted per each type of data (Email, Url, Phone, Date, Number, Address, Duration, Extracted data (Prior responses), Variables, Attributes). 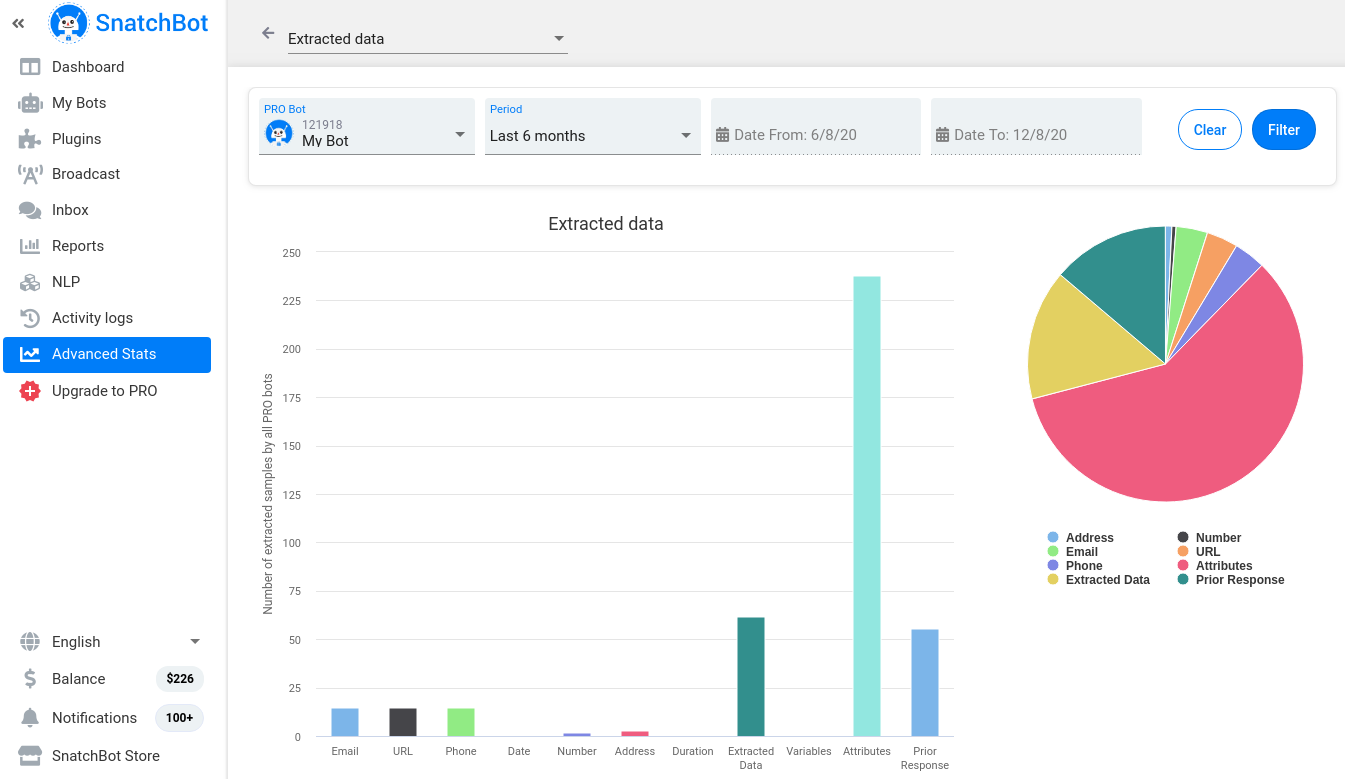 The table with all the extracted samples

In the table below you can see the number of samples extracted from a particular interaction of a particular bot. Samples are grouped by extraction types.

You have an option to group all the samples by bots.

Each record contains the following:

You can download each particular group of samples as a JSON or XLSX file.

In this chart you can see the most popular interactions in your bot.

An interaction is considered to have been triggered once the user has replied to the interaction. 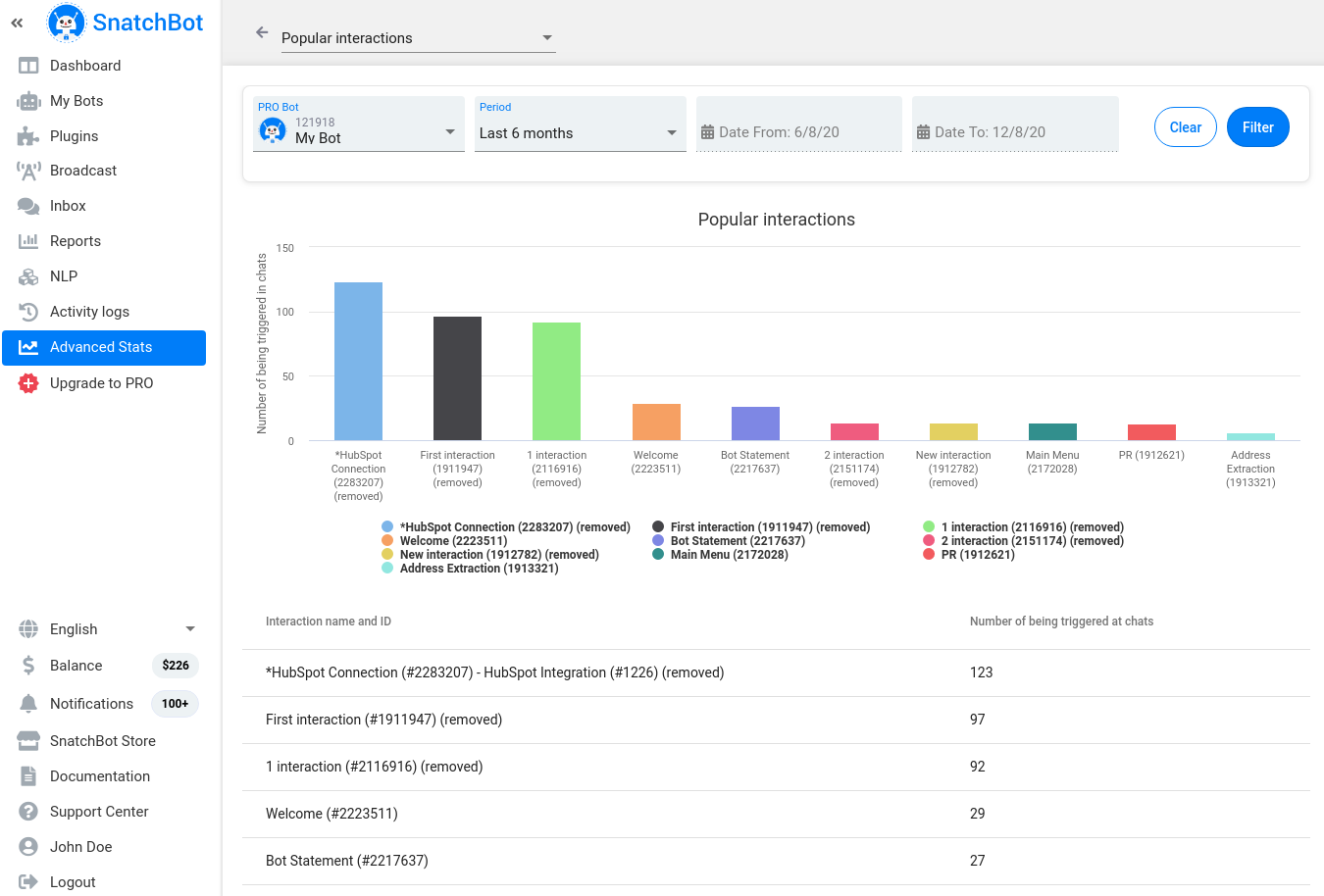 Below is the list of triggered interactions. Each record contains the following:

If you have selected a bot in the PRO-Bot dropdown, then you will see the Bot activity chart and the Activity data table. 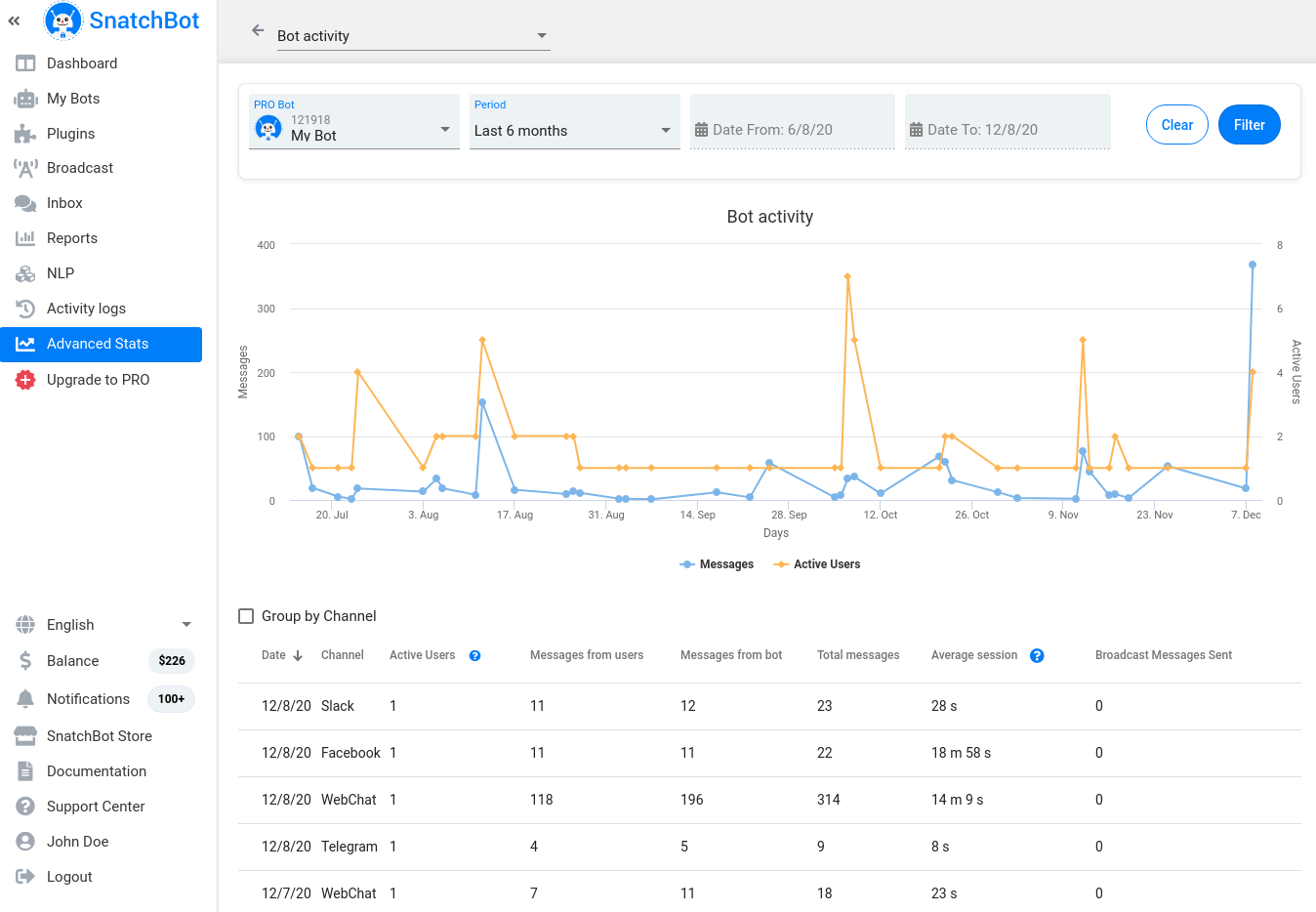 Group by Channel - groups the data in the table by channels.

The session expire time does not affect any data in Advanced Analytics.

Watch the Video tutorial "SnatchBot’s Advanced Stats for your Chatbot"

Check the Reports section to find records about every single message sent and received in your account.